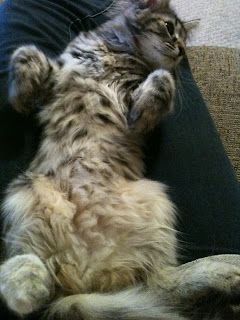 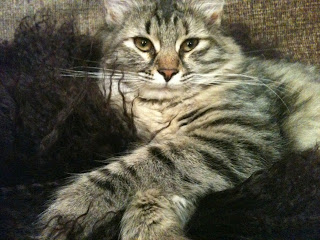 A lovely message from Chrissy who adopted one of Aria/Phoenix's babies this year
'Bella is so great! She's really cheeky but really affectionate too! She loves sitting on the window ledge and teasing the big cats outside! She's started chattering too when she sees the birds! And really randomly she loves water! She likes playing with the running tap and dips her paws and nose in to it! Here's the first of a few pics, she's a sweety! X
Thanks for everything! We love her! '

Posted by Madcatlady at 20:16 No comments:

Nem's babies arrived last Monday, after a slow start all doing well. We have at least two torties..one has the most amazing red blaze on her head..
Dad is Phoenix (red silver shaded), his last litter before he was neutered. It looks like possibly some golden browns (Nem's dad was golden), two kittens have white paws and chest like mum. Not sure if any silvers yet as Phoenix's babies always start off very dark, so will be a couple of weeks before I know.
I will post some pics when they are four weeks...when they look like cats! and will contact everyone who expressed an interest shortly
Posted by Madcatlady at 11:29 2 comments:

A fun day at TICA Elescar

We had a nice day on Sunday at TICA Elescar. We went primarily to show our BLH Charlie as TICA is currently the only UK club where he is eligible to be shown...you can see his report on our Witchstorm blog
It was an odd days judging for the sibbys. Rurik did well with three finals and Dawn's babies got a final each. Her silver, who was consistently placed fourth, suddenly got BOB in Robin Sessler's ring.
Sadly Tam did not get any finals. She got 2nd best of breed from Lisa Dickie who finaled Rurik in her speciality final. When introducing the sibbys she spent the first five minutes talking about 'a wonderful tortie smoke' (tam) who had a great body and coat and just needed to mature a little in the head...I got the feeling if her final had been all breed we might have been included! Tam made it known she hated the tanoy...and her ears go straight up when she is nervous, so some of the judges did not perhaaps see her at her best.
It was nice to catch up with some of the breeders have not seen for a while...was surprised not to see more yorkshire folk there!
Posted by Madcatlady at 22:33 1 comment:

Just received this amazing picture of one of our May kittens who has gone to live with Marcus and his family near Portsmouth...what a handsome chap and a great size for six months! His dad is Phoenix and his mum Lulu. Marcus says he has a lovely laid back purrsonality which shows through in the photo dont you think?... 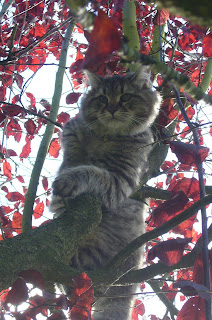