A three o'clock start, snow and a wrong turn, and we arrived at MK at the incredible hour of nine o'clock...should have taken four hours! We had a good result though, Witchfyre Elijah got his Ex1, Best in Variety, NEM with white and was NOM for BIS Preliminary breed. The final came and two judges took the stand, it was tense and Elijah at just six months, was against the much older Vassily son, a gorgeous red point. It was a split vote so Martin Kabina was brought in to break the tie, and afer much deliberation, picked the red point...oh well, maybe next time..it was a bit like deja vu as the same happened in 2008 with Elijah's mum Aria and she was beaten by one vote by my own chocolate Aby!!!!
Our little red spotty boy Adniolo Aleksei Witchfyre, got his Ex1 at 4 months and also beat eleven other entries for Best Debutante!
All in all a good day, not bad for the boy's first show, and just about worth the 400 mile round trip! Was nice to see everybody. 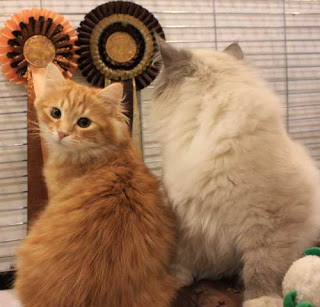 Aleksei and Elijah checking out their winning rossettes... 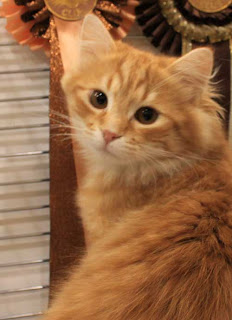 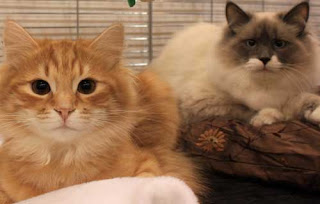 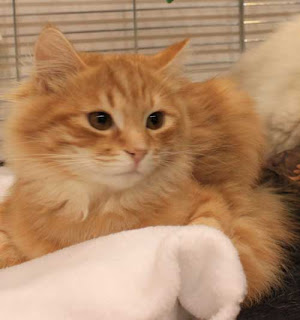