Lulu's babies are eleven days old, and all have their eyes open.
Had just enough time for a quick snapshot of babies...bit chaotic here, John putting a new staircase...just got half and a ladder for the rest right now!!!

Here are the babies....all kittens currently under evaluation 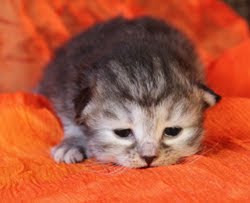 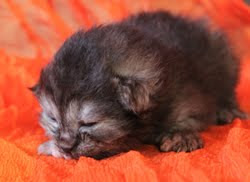 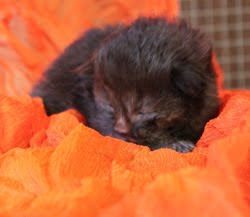 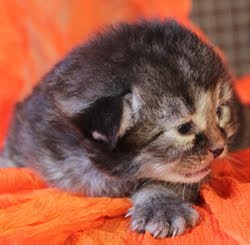 Well, the babes are a week old today.
We are almost certain we have:
a brown tabby boy, he has the most amazing head and is looking promising
a tortie(dark silver?)tabby girl, again is chunky with a good head
a black possibly smoke boy..he is the smallest and keeps getting pushed out, but already has his eyes open, just got to keep an eye on him at feed time! He is solid black and not a single white stray hair in sight...
a solid tortie girl...she is black with thin red painted tips here and there, very pretty.
Will try and get some pics up in the next week or so, but am mad busy at the moment
Lulu is being a very patient mum...she's the best X
Posted by Madcatlady at 17:29 2 comments:

Whew...just got back from the show today...didn't realise it was that far...bout time we had some more FB shows over my side!!!

Boys got their EX1' s but no noms this time, Elijah's coat had blown so 'not in show condition'! Nem got Ex2 as was nervous...not been to a show for three years!

Took my baby British longhaired tippy...was the centre of attention, with photos and ooh's and arhhhs all round...just missed BIS as the only other unrecognised breed was an Aussie mist...the judge said he had to pick the Aussie as it was nearer to being a recognised breed!!!! but loved him and said he was an excellent British.

Got some great comments about Elijah...his judge thought he was amazing. He commented that he had seen some excellent Nevas in Poland and that he was as good...his undercoat was exceptional and overall excellent...if he had been in better show condition he would have been NOM.

Alexsei's judge said he had an excellent ear set for one so young, very good coat texture and very promising profile. He got to the last three for NOM with the MC and NFC...guess who won...yes the MC...something that keeps happening to out lovely sibbys...come on judges time to move on....

Elijah won Best Cat in the Breeder side class...not won that one before, and very proud...the judge loved him

We'll keep trying...does anyone know a good cat groomer in my area who can fix moulting cats?
Posted by Madcatlady at 21:00 1 comment:

Lulu delivered us four stunning big babes in the early hours of Thursday morning. I think we have a tortie girl, two silver tabby boys and a black smoke boy...their colour is amazing, the black is like velvet...all kittens under evaluation. I will contact those on the waiting list shortly.

Elsa is due in about four weeks to Sam, fingers crossed are looking for a nice girl to keep. As Elsa has a golden undercoat, we are hoping for golden kittens or a least a rich golden brown. Both mum and dad carry classic tabby..so who knows
Posted by Madcatlady at 23:06 2 comments: